Monroe County is broken into five districts. Five commissioners are elected countywide and must reside in the district they represent. The districts are broken down by residential population based on the 10-year census, which will be redrawn in 2020.

There are five municipalities within Monroe County, which each have their own city managers, elected councils and mayor, and government procedures. The municipality government oversees its own municipal budgets.

Board of County Commissioners

The Board of County Commissioners (BOCC) governs unincorporated Monroe County and the primary County government functions. The BOCC consists of five members elected Countywide for staggering terms of four years in the general election in even years. Should there be no opposition from an opposing party, an election is determined in the primary. Candidates must be registered voters and reside in the district they will represent. The districts are determined based on population every 10 years after each U.S. Census.

The County Administrator, County Attorney, Land Authority, and Tourist Development Council answer directly to the BOCC. The District 16 Medical Examiner is an independent district, which has jurisdiction in Monroe County.

The BOCC approves Monroe County’s budget, which includes the budgets for the constitutional offices.

The County has five elected Constitutional Officers that oversee the county procedures:

Monroe County Mayor is the title given the chairperson of the BOCC. The position is ceremonial, and the mayor holds the same authority as the rest of the commissioners. At the first BOCC meeting after the general election (and again at any subsequent meeting when desired) one of the commissioners is chosen by a majority vote by the other commissioners to serve as mayor. A mayor pro tem is also designated at the same meeting. The mayor pro tem is like a vice-chair that will proceed as mayor in the event the mayor is unavailable.

The mayor presides over BOCC meetings and serves as the representative of the County on ceremonial occasions. At election time, the chairperson serves on the Canvassing Board. The chairperson is also responsible for signing documents and cosigning, with the County Clerk, all County checks.

Monroe County government adopted a commission-administrator system to carry out the functions of the County. The elected commissioners enact local ordinances and administer them through their appointed county administrator. The commission approves budgets and oversees spending.

The public is always welcome to attend meetings of the Board, and any citizen wishing to speak on an agenda item may, by registering his or her request with the Clerk before the item is called, voice an opinion when the item comes up for discussion. In addition to routine County business, the Board of Commissioners holds public hearings on many subjects, including proposed ordinances, the County Budget, capital projects (public buildings and major improvements) and their acquisition, construction, and equipping, as well as on appeals to decisions of the Planning Commission and for special taxing districts for fire and ambulance service. These boards and committees can be found at www.monroecounty-fl.gov/boardsandcommittees.

Florida Fish and Wildlife Commission (FWC): FWC has many entities in the Keys, including law enforcement, licenses and permitting, conservation, and research. On the law enforcement side, the FWC officers overlap with Monroe County Sheriff’s Office on the water and near coastal communities. FWC officers have access to shallow water and respond as backup or primary on water-related issues and public safety. With Hurricane Irma, the agency brought in supplemental officers and equipment to support Emergency Management.

On the research side of FWC, the agency keeps track of economically stimulating fisheries like lobster and stone crab, which is important not only for the County but also for the State. It also helps create awareness about invasive species, like lionfish, and is the State agency tasked with testing antibiotics for the recent coral disease outbreak.

Florida Department of Environmental Protection (DEP): The DEP is the State’s lead agency for environmental management and stewardship, divided into three areas: land and recreation, regulatory, and ecosystem restoration. In Monroe County, DEP has been an integral agency for the County’s canal restoration, stormwater, and sustainability projects.

National Oceanic and Atmospheric Administration (NOAA) and National Weather Service (NWS): For all things wind, water, and weather-related, the County entrusts the experts at NOAA and NWS for updated forecasts and ongoing weather issues. Daily forecasts can be found on the NWS website and During a hurricane event, like Hurricane Irma in 2017, NOAA also provides satellite imagery to help evacuees survey damage from an aerial view. NOAA is also responsible for the Florida Keys National Marine Sanctuary, which protects 2,900 nautical miles of Florida Keys coastal and ocean waters. For decades, both have helped Florida Keys fishermen and boaters make informed decisions.

United States Coast Guard: The United States Coast Guard has two stations, one in Islamorada and one in Marathon, and a sector in Key West. Sector Key West has a 55,000 square mile responsibility, including Cuba and the Bahamas. The Coast Guard protects the maritime border, environment, and marine commerce. They conduct search and rescue and law enforcement operations, and in the event of a disaster, Coast Guard works with Monroe County’s Emergency Management team.

United States Customs and Border Protection: In the event of an emergency, U.S. Customs and Border Protection agents become a part of Monroe County’s Emergency Management team. The agency is also responsible for border security and detaining illegal immigrants, preventing human trafficking, and checking people in and out at the Key West Port of Entry.

Monroe County is the southernmost county in Florida and the United States. It is made up of the Florida Keys and portions of the Everglades National Park and Big Cypress National Preserve. These parks are mostly uninhabited mainland areas. Most known are the Florida Keys with its string of islands connected by U.S Highway 1, which ends in Key West, 150 miles southwest of Miami.

In total area, Monroe County is comprised of 3,737 square miles with 73 percent of it being water. The Florida Keys proper are an elongated, curved bow-like-chain of low lying islands over 220 miles in length. They extend from the southeastern tip of the Florida peninsula to the Dry Tortugas and lie between the Gulf of Mexico and the Atlantic Ocean. Key West is the largest of the islands in the chain with a natural deep-water harbor. The keys are islands of rock and sandy beaches are not common. Just miles offshore on the Atlantic side of the keys is the only living coral reef in the continental United States. No point, in the keys, is more than four miles from water.

Because Monroe County only has one highway, accessibility to the county seat (Key West) is time-consuming and difficult. Other county government offices are located in Marathon and Key Largo to handle basic public government functions. Monthly commission meetings are rotated between Key West, Marathon, and Key Largo along with three budget hearings. The county commissioners strive to make themselves available to all county residents. 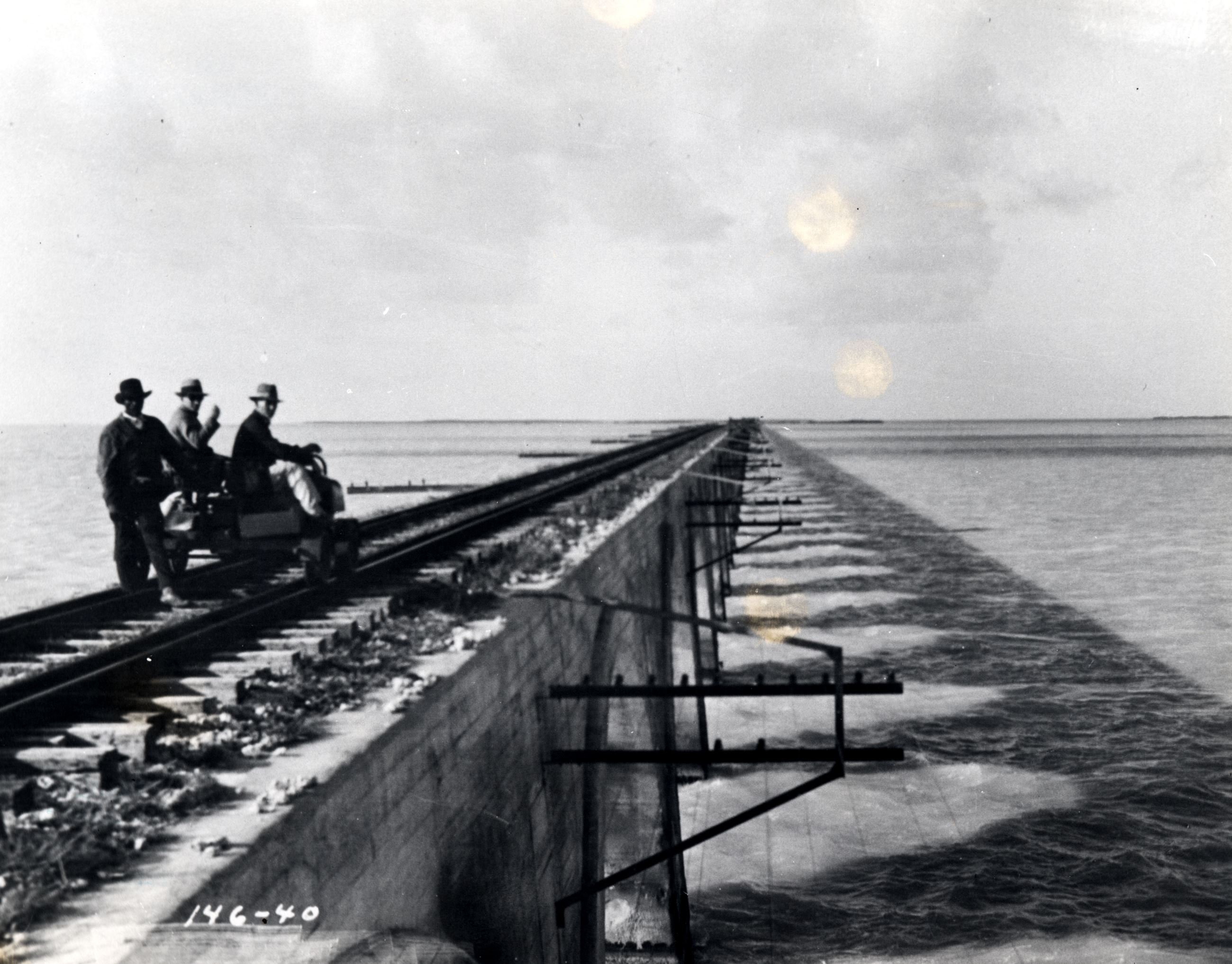 On his search for the “Fountain of Youth,” in 1513, Spanish Explorer Juan Ponce De Leon sailed along the Florida Keys after he first landed near St. Augustine. Before returning to Spain, he sailed around to Florida’s West Coast, then to Cuba and Puerto Rico[2]. This was the beginning of other wandering Spanish and English explorers looking to colonize new lands and discover trading partners. The “Age of Exploration” helped create a trade route between Europe and Central and South America with a port stop in Cuba, which is 90 miles south of Key West. Ships that sailed the trade route could be met with disaster by hurricanes, reefs, or later on pirates.

During the next three centuries, Spain and Britain claimed Florida as a territory, and in 1821, Spain ceded Florida to the United States according to the terms of the Adams-Onis Treaty. A year later, a small naval depot was created in Key West to help rid the area of pirates.

On July 2, 1823, an act of the Territorial Legislature established Monroe County as the 6th county in the Florida territory. Monroe County was named after then-President James Monroe, our 5th U.S President, who served between 1817 and 1825. The county’s boundaries then were the southern portion of Florida. Over time, other counties were formed within the original Monroe County boundary including Dade, Broward, Collier, Lee, Hendry, and parts of Charlotte, Glades, and Palm Beach[3].

Five years after Monroe County was established, Key West was incorporated and became the county seat. The population at that time was less than 600 people. The main industries by 1830 were salvaging shipwrecks on the reef and fishing. By 1845, Florida was granted statehood.

During the American Civil War, while Florida seceded and joined the Confederate States of America, Key West remained in U.S Union hands because of a Naval base. Fort Zachary Taylor, which still stands today was constructed between 1845-1866 and was an important Key West outpost during the Civil War. But as a result of a wartime population increase, Key West was the largest city in Florida. Monroe County’s population by 1870 was 5,657 and only 641 lived outside of Key West.

In the late 1800s, the economy in Key West was changing from ship salvaging to cigar production. Construction of lighthouses along the reef made the waterway more navigable and it contributed to the decline in the number of shipwrecks. During this time, there was a large number of refugees that fled from Cuba. These refugees brought over with them their skill in hand-rolling cigars.

By 1890, the population of Key West was nearly 18,800 residents and it claimed to be the biggest and richest city in Florida. At the height of the cigar industry in Key West, there were approximately 200 cigar factories producing 100 million hand-rolled cigars annually4. However, manufacturing competition from Tampa and Ybor City put an end of Key West’s hand-rolled cigar industry by 1930. Today, one of these cigar factories is home to county offices, in the Gato Building.

The Florida Keys were perpetually changed with Henry Flagler’s decision to build a railroad to Key West from Miami. Flagler envisioned Key West as a port city when the United States signed an agreement in 1903, to construct the Panama Canal[5]. His trains would provide deliveries throughout the east coast since he had already constructed the rail lines between Jacksonville and Miami. The first train rolled into Key West in 1912. Rail service in the Keys was short-lived when the Hurricane of 1935 destroyed a portion of the railroad in the Upper and Middle Keys. This portion was never rebuilt due to costs.